The newly-built MC Hotel in Montclair, NJ, received an artistic addition this week.

Local artist Siona Benjamin had invited me to collaborate on a mural for the hotel’s three-story rotunda ceiling.

Installation of the mural required two installers with scissor lifts.

We created a 20′ diameter sky mural with a border motif.

The sky and the border were painted separately on a small scale, which were expertly scanned and merged by Lizza Studios. Signarama printed the image on a rigid exterior material called Dibond, the same stuff road signs are made of.

The panels were installed around the ceiling’s sprinkler system.

MC Hotel prides itself on being at the intersection of culture and community. Part gallery, part gathering place, the Hotel is in the heart of Montclair’s thriving artistic community.

Many thanks to architect David Ashen of DASH-Design! 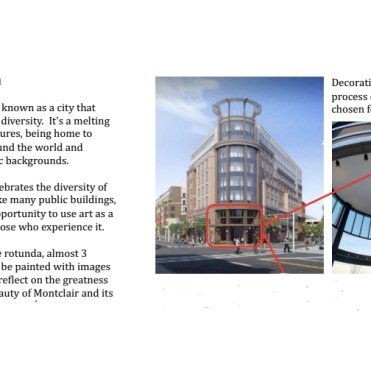 The Artists at the MC Hotel Rotunda

Yvonne Verwer at YVStudio LLC has done high-quality decorative and murals and decorative finishes for over 20 years in many of New York's finest homes and businesses. Her work has been shown at The French Designer Show House, and The Hudson River Show House. She has been featured in The New York Times, The New Yorker, Avenue Magazine, and Nickelodeon Magazine. View more posts